The house with faces 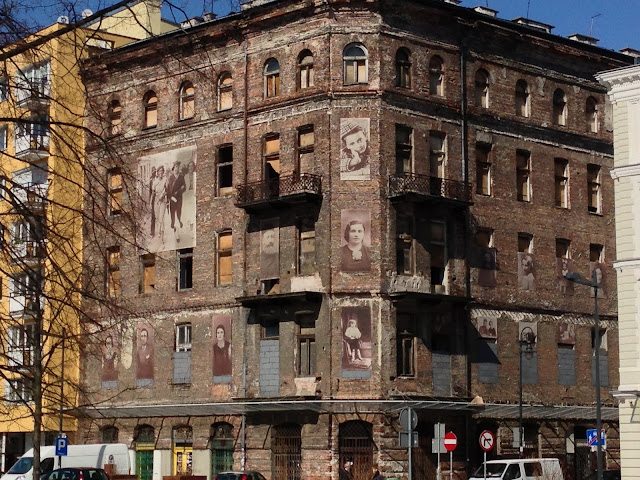 Hidden away just a minute from the centre of Warsaw, sits ulica Prozna, and no 14, perhaps one of the most photographed buildings in the city.

Stood on its own today on the corner of ul Prozna, and Plac Grzybowski,  no 14 stands in contrast to its PRL architectural surroundings, and new refurbished neighbour opposite.

A building, my daughter referred to as "the house with faces", in reference to the photos of Jewish victims of the holocaust, whose faces adorn, no 14's facades.

The photos collected by the " I can still see their faces" (‘I ciągle widzę ich twarze) campaign, run by Gołda Tencer,  who is the founder and director of the Shalom Foundation.

In 1994 she appealed to people to send in photographs of Polish Jews so that an exhibition could be created commemorating those who died. The incredible response netted over 9,000 photographs, some from survivors and their families, some from Polish neighbours or friends of those killed. Then in 2008 the ‘I can still see their faces exhibition’ was mounted in ul. Próżna as part of the commemorations of the 65th anniversary of the Ghetto Uprising.

What is ul Prozna and number 14's history, who owned these buildings, who lived here, what went on here, pre world war two.

Mosaic PR's office is but 5 minutes walk from here, many people pass by without even glancing up. We wonder, how many think, or even try to imagine what was here and went on here many years ago.

As ever we love digging with an open enquiring mind, finding history, acts and evidence and putting together an overview.

In this case as ever, our curiosity about the area in which we work, and our interest in real estate provoked us to dig deeper.

ul Prozna is the only street in Warsaw, that survived the obliteration of the Jewish ghetto. It's tenement houses arranged in kamienicas, and empty shops boarded and gated, empty inner squares, serve as a stirring, yet eerie memorial to the extermination of its previous community.

"It's appearance makes it virtually autonomous from its surroundings, the centre of Warsaw.
It is provocatively positioned in historical and aesthetic opposition to the modern city. The street constitutes a dramatic juxstaposition of a dead and rotten fragment of the city from the past and the indifferent modern city. This is an aesthetic and ethical conflict in the centre of Warsaw. It is the fruition of German genocide during the war and post war indifference"

The four-story building was built between 1898-1900 for Majer Wolanowski. It was richly decorated with hand-forged balustrades and balconies, stucco oak covering the gate and a marble staircase to the gates.

Earlier this place was the site of Samuel Flinker's  house, which Wolanowski acquired in 1894. Majer Wolanowski was a respected and a well-known entrepreneur in Warsaw. From 1874 he was the owner of Warszawskiej Fabryki rub i Drutu I. Wolanowski SA (Warsaw Factory Screws and Wire I. Wolanowski SA).

His factory began the production of nails and wire, and in the late 19th century produced components for railways and  the telephone network . He was the main supplier for the the Polish Ministry of Post and Telegraph.

All very apt, considering the plethora of ironmongery shops which have been sited in both Plac Grzybowski , and ul Prozna, Even more so, given no 10 Prozna, was the site of the first telephone exchange in Warsaw.

The office of the International Bell Telephone company, whose cables snaked like a huge spider accross the roof of the houses in Prozna.

Wolanowski died in 1900, and no 14 passed into the hands of his children Israel and Chana Wolanowskich Graff.

On the ground floor there were ironmongers stores such as Maurice Graff and "H. B. Lebelsond, the Meerson department store and the Epstein, tinplating factory warehouse as well as P. Brykiera's shop which supplied picture framing stock to measure.

At the beginning of the twentieth century, Mordka Berghauer opened a saddlers at no 14 and the building also housed a shelter for homeless Jewish children.

In the mid 1930's, after the death of Israel Wolanowskiego, ownership of no 14 passed to his co owners, and their heirs. In the interwar period no 14 housed, the Gershon Szyfmanowicz department store and Judy Kenigsberg's jewellery shop.


In November 1940 , the area of Gryzbow and a fragment of ul Prozna became enclosed by the Jewish ghetto walls. In April 1941, the street was excluded from the ghetto and the building was occupied by Poles.

During the Warsaw uprising, ul Prozna was at the centre of the battle, with Warsaw's AK army fighting to seize a strategic target , the PAST building which housed the telephone and telegraph exchange for the city.

On 2nd August 1944, a barricade was erected between no 9 and no 14 ul Prozna. No 14 was the headquarters of Kilinski battalion . Around the corner on Marszkalkowska at the Past building were 130 German troops, the SS and police.

No 14 was fortified and fierce battles ensued with 36 German dead and 35 insurgents. 20th August 1944, the Past Building was captured by the Polish AK army.

After the war, Ul Prozna and the houses had mostly survived. No 7 had its last storey burned and the wing facing the square was demolished.

Despite surviving the war, ul Prozna didn't fare so well at the hands of the communist Capital Reconstruction committee. This dogma driven body demolished no 1, 3, 8  and 10 ul Prozna.


This body planned to have a socialist realist square in this area  with a huge keystone in the middle with the PAST building as the focus. This required them to demolish all buildings in Plac Grzybowski and ulica Prozna.

In the 1950s the palace on the corner of ul Zielna and ul Prozna was demolished, and the stucco facades removed from no 9,12,14 in ul Prozna.

The building at no 14 now owned by the Polish government under PRL rules, with new tenants, it was never repaired or maintenanced. This was done deliberately to allow slum conditions to develop to justify demolition, sadly many other old pre war buildings paid the same price.

But the heritage and character of ul Prozna, and no 14's first owner, an iron goods producer continued. Ironmongers, shops, and a restaurant traded here post war.

In 1983 a campaign to save ul Prozna started, as Warsaw city council wanted to demolish it.
Warsovians and social activists protested and a team of them created "Guardians of the Cultural Heritage of Warsaw" organisation known as  "OCD". Through this association, social activists urged regional conservation officers to  to enter the remaining buildings on to the official register as a historical monument.

In 1985 buildings were enclosed with wooden roofs and supports, and finally in March 1987 they were entered in the official register of monuments. The first which was to be restored was No. 7,  In 1993, the American philanthropist Ronald S. Lauder, president of the Jewish Renaissance Foundation announced that it had plans to invest in Próżna. The foundation established the Prozna Street Company (PSC) and this company bought No. 9 The notarial deed committed the company to begin the repairs within year and to finish this within two years. The company also promised to restore the entire street and facades of the buildings on both sides of the street.

In 1998 P.S.C. acquired No. 7, and a year later the company submitted a proposal for the revitalization of buildings 7 and 9 On the ground floor would be Jewish shops and restaurants, and above residential apartments.

In the same year in both houses the existing tenants moved out, and sadly with them the antique fixtures and fittings. Even the whole interior and equipment of the pre-war restaurant from no 7 .


In 2001, the investor changed their plans and decided to build a luxury hotel. A new company Prozna Properties which in 2003 presented a proposal with the company Warimpex. The plans also detailed houses, built in a superstructure which caused protest and outrage amongst Warsovians, social activists and received fierce opposition from the building's historical curator. The investors changed their plans to build an office complex in a period perfect reconstruction of ul Prozna 9.

From 2005 to 2010, ul Prozna was the site of the Warsaw Jewish culture festival  known as the Singer's festival, it is not clear why this popular festival and exposition of art stopped in 2010.

In October 2012, images of ul Prozna 14 were seen worldwide, due to an exceedingly controversial art project by Italian artist Maurizio Cattelan, titled Him.

The project showed a kneeling and praying Adolf Hitler inside the eerie gateway of no 14, only visible through a diamond shape cut in the door.


The statue attracted large numbers of visitors since its installation  but some organisations have criticised the decision to erect it in such a sensitive area.

One Jewish advocacy group, the Simon Wiesenthal Center, described the statue's placement as "a senseless provocation which insults the memory of the Nazis' Jewish victims".

"As far as the Jews were concerned, Hitler's only 'prayer' was that they be wiped off the face of the earth," the group's Israel director, Efraim Zuroff, said in a statement.


Cattelan has not made it clear what Hitler is praying for, although organisers of the exhibition in which it features claim the statue is meant to make people reflect on the nature of evil. Fabio Cavallucci, director of the Centre for Contemporary Art, which oversaw the installation, said: "There is no intention from the side of the artist or the centre to insult Jewish memory."It's an artwork that tries to speak about the situation of hidden evil everywhere."

Poland's chief rabbi, Michael Schudrich, said he was consulted on the installation's placement but did not oppose it because it conveyed a strong moral question by provoking the audience. He said he was reassured by the organisers who told him the statue did not aim to rehabilitate Hitler but instead show that evil can present itself in the guise of a "sweet praying child". "I felt there could be educational value to it," Schudrich added.

The offending statue was removed.


Opposite no 14, the renovation of no 9 by Warimpex finished in February 2013, the contrast of the two sides of the street is incredible. The detail of the facades on Le Palais , an office complex is amazing as is the work inside the interior.


The city of Warsaw  it is believed  wants to sell Prozna 14, however the thoughts of the curator that facades should not be restored, coupled with the cost of renovation which the city estimates at 20 million zloty and reassigning the ownership of the building has taken ages.

However it seems things maybe moving along, quoting Warimpex general manager Jerzy Krogulec, He says Warimpex will be bidding for Próżna 14. “The tender could be held in June, and we will take part in it,”

So Ul Prozna founded in 1770, survived being part of the Jewish Ghetto, the Warsaw uprising, the aftermath of the war, and communism.

Now it looks like the other half will possibly receive a new lease of life, and if its anything like Warimpex's Le Palais, its going to be one of the most beautiful streets in Warsaw.

The members of skyscrapercity.com and http://www.lucjanwolanowski.com for being such valuable sources of information

Cafe Prozna for coffee, cakes and help during our photography sessions there

http://www.cafeprozna.pl/   finally the caretaker of the block near  Prozna 14 whose assistance in getting in to advantageous points and his look out duties who made this blog possible

To find our more about Mosaic PR  follow our blog or us on twitter, or just go to www.mosaicrealestatepr.com